Earlier in the year I began a small art class with 3 young women, Ann, Naomi and Janet, who each have a physical disability. Although Ann has found meaningful work, Naomi and Janet are both are unable to work because of their disability and do not have a stable source of income. As we began doing simple art projects with them, I saw that they all were able to create- to draw, paint, color, cut and glue- what one could not do another could do, which made them a great team.

I thought perhaps they could try making cards and if they did well, maybe they could be sold. This would give them a source of income. It took a couple months of classes before we were able to settle on a design that they could do well enough to sell. Then, the work of making the cards began. Anne and Naomi, who both live in the village, began to come to work on the cards in their free time. When I suggested that they take some supplies home to work on them Naomi shyly told me, “Sister, we don’t have a table in our house.”

We began to meet a t Janet’s every couple of weeks. Because Janet lives further away and is unable to stand or walk we took everything to her place and met there. It was at her home that the group came up with the name Kongot Nyokaram, which in Pokot means Good Friends. It was obvious how they enjoyed being together, supported one another and were indeed becoming good friends.

When I returned to the U.S. in July, I was wondering if the group would continue to meet and make cards without me. I was very happy upon my return to see that not only had they continued, but they had created some new designs on their own. They continued to sell cards to those who visited our mission while I sold some of their cards in the US. When we put their earnings together they had enough to buy their own supplies to continue making cards, with some money to spare.

Recently, I met another woman Helen, who is also disabled. One of her legs is significantly shorter than the other. She does have a special brace and shoe that allows her to walk. Ann and I invited her to join “Good Friends.” Helen lives in another village. When I asked her how far away it was she said, “Sister, it is far.” But I could never get her to tell me just how far it was for her to come. I later learned that she walked 4 hours to meet with us. It is still something that touches me she comes so far just to make cards and to spend time with us.

Helen, Ann, Naomi and Janet have great pride in what they are doing. They are learning how to run this little business on their own. They keep their profits in common and when someone needs something, like shoes, they talk with the group. Usually, they agree that one or the other of them can buy whatever it is they need. Each week Ann gives a report on how much they have spent and earned from their last meeting. They have been a great witness to me…living in this simple way. I am reminded of the first disciples in the Acts of the Apostles, “All who believed were together and had all things in common; they would sell their property and possessions and divide them among them all according to each one’s need.” (Acts 2:44,45) 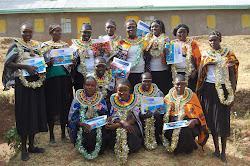 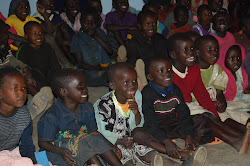 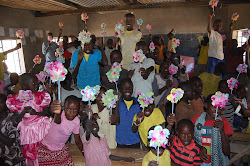